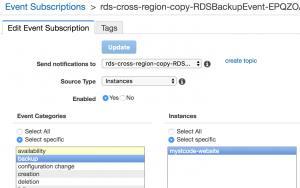 After posting the previous post on this topic (Copying RDS snapshot to another region for cross-region recovery) , I noticed a lot of people being interested in using the code I provided as an example. Many were not sure how to make use of it, and after a couple of pull requests it became obvious that a complete, fully-working code and CloudFormation template would be a good idea. So, yesterday, I pushed an update to aws-maintenance repository with a fully working code, which you can easily customize via CloudFormation parameters to match your needs.

The main changes include:

Some notes as for what to expect:

If you’re interested in seeing the exact changes made, check out this commit.

If you just want to use the solution, download the CloudFormation template and create a CloudFormation stack using it. When creating a stack from this template, you will be asked for two required parameters: source and target regions. Source region must be the one where your RDS instance is running. The target region is the one where you want to store the copies of snapshots. Use the region IDs, not the full (human-friendly) names, so for example “eu-west-1” for Ireland. For a full list of regions where RDS is available (and their names and IDs), check out AWS documentation.

By default, the Lambda will be subscribed to notifications from all RDS instances within the source region. If you only want to limit this to specific instances, provide a comma-delimited list of the instances names in the third CloudFormation parameter (for example, “database-1,database-2” to limit the code to only those two instances). It’s helpful if all your test and production environments are in the same AWS account (though, they shouldn’t really…) and you only want to use the code for production databases.